PETRUS ROMANUS: The False Prophet And The Antichrist Are Here

Who Will Be Peter The Roman? 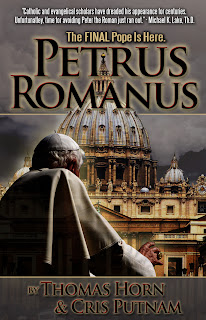 From Christians to New Agers, skeptics to historians, the world is presently enthralled with what will happen during and following the year 2012. In general, the excitement (or dread, as the case may be) surrounds a variety of predictions made by ancient and modern sources concerning a portentous moment in time.

Mankind has entered a period of unprecedented global upheaval, according to these experts, when the earth and all life on it will undergo apocalyptica marked by the end of the “thirteenth baktun” of the Mesoamerican Mayan Long Count. The exact end date of this calendar is December 21, 2012, when during the winter solstice at 11:11, GMT (Greenwich Mean Time), the New Age crowd says the sun will align with the galactic center of the Milky Way galaxy, an event that occurs only every thirteen thousand years. The precession of the equinoxes will conclude a twenty-six-thousand-year cycle, bringing the astrological Age of Pisces to an end and introducing the beginning of Aquarius, when the next cycle begins and the sun rises out of the mouth of the Ouroboros (great serpent of the Milky Way). This is the sun rising in Sagittarius, the centaur with a bow—the symbol for Nimrod coming out from the mouth of Leviathan and the sun “god” rising again—Apollo/Osiris. The Mayans predicted this conjunction, interpreting it as a harbinger of the end of the world as we know it and the beginning of a new “enlightened” pagan age. People from the world’s greatest religions including Christianity and Islam also see current global developments as potential omens of an end-times scenario leading to the Apocalypse. This includes catholic mystics who believe in the Prophecy of the Popes.

On this order and as discussed in an earlier entry, the Catholic seer who in 2002 correctly predicted that the pope succeeding John Paul II would be named Benedict XVI, Ronald L. Conte Jr., believes the next pope will be Cardinal Francis Arinze and that he will take the name Pius XIII. This name (Pius) is associated historically with popes who emphasized authoritative doctrine during their pontificates. Cardinal Arinze fits this description, and Conte interprets this qualification as best fulfilling “Peter the Roman” as a pope who “will reaffirm the authority of the Roman Pontiff over the Church; this authority is based on his place as a Successor of Peter” and “will emphasize the supremacy of the Roman Catholic Faith and the Roman Catholic Church above all other religions and denominations, and its authority over all Christians and all peoples of the world.” To this, Conte adds, “During the reign of Pope Peter the Roman, the great apostasy begins” and this pope will mark “the first part of the tribulation, during our generation.”[i] Conte envisions this apocalypse beginning in 2012 when, as he sees it, Benedict is assassinated and is replaced by Petrus Romanus. This is followed by a series of cascading events resulting in World War III, which is triggered when Iranian-backed terrorists explode a nuclear bomb in New York City. The Great Tribulation begins, and by July 2013, Rome is destroyed when it is struck by a nuclear missile.

Elsewhere in our upcoming book we have meticulously investigated a French codex entitled, La Mystérieuse Prophétie des Papes (“The Mysterious Prophecy of the Popes”), issued in 1951 by a Jesuit priest and mathematician named René Thibaut (1883–1952). Among his astonishing findings—hidden to the modern world until the publishing of our work—Thibaut found concealed in the Prophecy of the Popes a clever number of word plays that form many acrostics and anagrams.[ii] An example of one of the linguistic codes may hold cryptic agreement with Ronald L. Conte’s conclusion that Petrus Romanus will take the name Pius. The code is discovered in the Latin text “Peregrinus apostolicus”[iii] which was the prophecy for the ninety-sixth pope on the list, Pius VI. The anagram not only reveals the papal name, it does so twice: PeregIinUS aPostolIcUS. This appearance of the name “Pius” is rather astounding considering we have a published copy dated almost two hundred years before Pius VI was elected. But Thibaut suggests the repetition serves as an even farther-reaching poetic refrain. In other words, “Pius! Pius!” is similar to the excited binary “Mayday, Mayday!” that sailors cry out in dire circumstances[iv] and which may have prophetic implications concerning the name of the final pope on the list [Editors note: Thibaut's book in French and an English translation will be provided free with numerous other research works exclusively from Raiders News Update with the release of Petrus Romanus: The Final Pope Is Here].

In addition to being associated with Roman authoritarianism and cryptogramed in the Prophecy of the Popes, Conte bolsters his prognostication concerning the name “Pius” by pointing to the electrifying visions of another pope named Pius—Pope Pius X who served as pope from 1903 to 1914 and who saw a papal successor carrying the same name Pius fleeing Rome over the bodies of dead priests at the onset of the end times. Pius X is widely reported to have said:

What I have seen is terrifying! Will I be the one, or will it be a successor? What is certain is that the Pope will leave Rome and, in leaving the Vatican, he will have to pass over the dead bodies of his priests! Do not tell anyone this while I am alive.[v]

In a second vision during an audience with the Franciscan order in 1909, Pope Pius X appeared to fall into a trance. After a few moments, he opened his eyes and rose to his feet, announcing:

I have seen one of my successors, of the same name [a future pope named Pius], who was fleeing over the dead bodies of his brethren. He will take refuge in some hiding place; but after a brief respite, he will die a cruel death. Respect for God has disappeared from human hearts. They wish to efface even God’s memory. This perversity is nothing less than the beginning of the last days of the world.[vi]

The third part of the Secret of Fatima, which was supposedly released in total by the Vatican June 26, 2000, seems to echo the visions of Pius X. A section of the material reads:

…before reaching there the Holy Father passed through a big city half in ruins and half trembling with halting step, afflicted with pain and sorrow, he prayed for the souls of the corpses he met on his way; having reached the top of the mountain, on his knees at the foot of the big Cross he was killed by a group of soldiers who fired bullets and arrows at him, and in the same way there died one after another the other Bishops, Priests, men and women Religious, and various lay people of different ranks and positions.[vii]

The conceptual framework of these visions and their validity is volatile among many Catholics who believe Rome is complicit in an intentional cover-up involving the true Third Secret of Fatima as well as other suppressed Catholic foresights that are rife with wildly different predictions concerning the future prophetic role of the Roman Catholic Church. Marian apparitions, visions by popes, interpretations by cardinals of the apocalypse, and approved mystical prophecies often stand at odds with recent Vatican publications. Even the “Catechism of the Catholic Church” approved by the Church and promulgated by Pope John Paul II (released in English in 1994, the first catechism in more than four hundred years), which draws on the Bible, the Mass, the sacraments, traditions, teachings, and the lives of the saints, states under the section The Church’s Ultimate Trial:

675 Before Christ’s second coming the Church must pass through a final trial that will shake the faith of many believers. The persecution that accompanies her pilgrimage on earth will unveil the mystery of iniquity in the form of a religious deception offering men an apparent solution to their problems at the price of apostasy from the Truth. The supreme religious deception is that of the Antichrist, a pseudo-messianism by which man glorifies himself in the place of God and his Messiah who has come in the flesh.[viii]

Possibly at the center of this prophecy and a “Vatican cover-up” of the complete vision of Fatima (and related prophecies) is a second and potentially more powerful papal contender for the role of Petrus Romanus or “Peter the Roman”—Cardinal Tarcisio Pietro (Peter) Bertone, who was born in Romano (the Roman) Canavese (“Peter the Roman”). Among other things, Cardinal Bertone is, at the time our new investigative book on this subject Petrus Romanus: The Final Pope Is Here heads to the printer, second in command at the Vatican. As the Secretary of State and the Pope’s Camerlengo (Italian for “Chamberlain”), he is responsible during a papal vacancy to serve as acting Head of State of the Vatican City until “the time of agreement” and the election of a new pope. Our interest for the moment is with his 2007 work, The Last Seer of Fatima that appears to have accomplished exactly the opposite of its primary objective, mainly, to refute another work by famous Italian media personality, journalist, and author Antonio Socci, whose manuscript The Fourth Secret of Fatima claims the Holy See has repressed information concerning the true secrets delivered in Marian apparitions to three shepherd children in the rural Portuguese village of Fatima in 1917. The three young people were Lúcia (Lucy) dos Santos and her cousins Francisco Marto and his sister Jacinta Marto, whose visions—containing elements of prophecy and eschatology—are officially sanctioned by the Catholic Church.

We continue the investigation into Cardinal Bertone and the hidden secret of Fatima in the next entry. What does this have to do with the election of Petrus Romanus? A lot, according to those now assembling at the Vatican in preparation of Conclave...