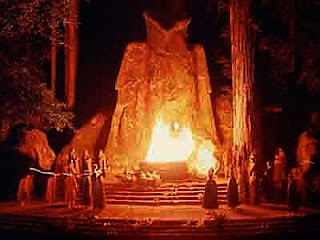 Editor's note: All notations will be cited when this series of articles have concluded. The information is based on research contained in Tom Horn's upcoming new book:
APOLLYON RISING 2012 The Final Mystery Of The Great Seal Revealed A Terrifying And Prophetic Cipher, Hidden From The World By The U.S. Government For Over 200 Years Is Here

WHAT THE FIRST SYMBOLS COMMUNICATED, AND TO WHOM

In 1992, former MI6 British Intelligence Officer, Dr. John Coleman wrote a book about “The Committee of 300” in which he claimed inside knowledge concerning world manipulation by an occult Illuminati elite. According to Coleman, “Moriah Conquering Wind” is one of the modern names the society members go by. He stated:

Included in the membership are the old families of the European Black Nobility, the American Eastern Liberal Establishment (in Freemason hierarchy and the Order of Skull and Bone), the Illuminati, or, as it is known by the Committee, “MORIAH CONQUERING WIND”…. In the Committee of 300, which has a 150-year history, we have some of the most brilliant intellects assembled to form a completely totalitarian, absolutely controlled “new” society - only it isn’t new, having drawn most of its ideas from the Clubs of Cultus Diabolicus. It strives toward a One World Government rather well described by one of its late members, H. G. Wells, in his work commissioned by the Committee which Wells boldly called: “THE OPEN CONSPIRACY-- PLANS FOR A WORLD REVOLUTION.” [1]

Dr. Coleman went on to warn about the devotion that the occult oligarchists have toward implementing a One World Order through emerging uniformed codes and laws by which everybody on the planet will be enslaved to the desires of the ruling elite.

For our purposes, the connection between Freemasonry, Skull and Bones (which George W. Bush is also a member of), and the knowledge that “Moriah Conquering Wind” is a title by which the occult insiders identify themselves, is notable. Moriah is an ancient term and its connection to “divine wind” as a vehicle for God and angelic war is important to Jewish Apocalyptic and mystical literature as well as to mainstream religious and esoteric minded peoples for different reasons.

On the surface, Moriah is the sacred mountain that Abraham nearly sacrificed his son Isaac on before the angel of God called out of the sky and stopped him. Moriah is also the location of the original Temple Mount in Jerusalem according to some scholars. The Foundation Stone at the heart of the Dome of the Rock in modern Jerusalem is believed to mark the exact location of Araunah’s threshing floor “in mount Moriah” over which the Temple of Solomon was built (see 2 Chron. 3:1). In addition to the significance of the geography, the role that Mt. Moriah (Hebrew Mowriyah, “Chosen by Yahweh”) plays in lessons about the relationship between God and man, Heaven and Earth, and angelology is deeper than most comprehend. Midrashic discussions of the Abraham/Isaac narrative have been argued where the perspective is changed from the Genesis account on Mt. Moriah to Heaven, where God watches and ultimately signals the angel to stop the sacrifice of Isaac. The Pseudepigraphal Book of Jubilees is used in such renderings, as the story from Jubilees offers the account from the angel’s viewpoint, in the language of the first person from heaven. Additional information about the angel that spoke to Abraham is included in the Zohar, Kabballa, Babylonian Talmud, Pseudepigrapha as well as classic texts by some members of Christianity and Islam who ultimately identify him as “Metatron,” the most powerful of all Angels according to these noncanonical works. For illuminatists, The Third Book of Enoch is among the most important of the Mystical Literature as it offers the genesis of Metatron by claiming that Enoch himself is the one who ascends into Heaven to be transformed into Metatron.

An extract from 3 Enoch reads:

“This Enoch, whose flesh was turned to flame, his veins to fire, his eyelashes to flashes of lightning, his eyeballs to flaming torches, and whom God placed on a throne next to the throne of glory, received after this heavenly transformation the name Metatron.” [2]

As Metatron, Enoch becomes the Angel in the Whirlwind and master over other angels of wind and whirlwind (including Ruhiel, Ra’miel, Ra’shiel et al).

Sparks emanated from him, and storms, whirlwind, and thunder encircled his form. The angels dressed him in magnificent garments, including a crown, and arranged his throne. A heavenly herald proclaimed that from then on his name would no longer be Enoch, but Metatron, and that all angels must obey him, as second only to God. [3]

Enoch is thus “a critical figure in Masonry as well as being heavily identified with ritual magic and Qabala [Kabbalah] through his association with—or rather transformation into—Metatron,” writes Mark Stavish in his book, Freemasonry: Rituals, Symbols and History of the Secret Society. [4]

The extra-biblical legend concerning Enoch’s transformation into Metatron and the angel’s connection with Abraham and Isaac’s test on Mt. Moriah is encoded within several of the occultist’s rituals. In some instances, the formalities combine elements of the Moriah story with other mythologies for the express purpose of aligning the exalted members of the society with the forces behind the Conquering Wind. Thanks to radio host Alex Jones, the public has seen one such ritual on film. A few years ago, Jones and a British filmmaker slipped into the Bohemian Grove 30 miles west of Santa Rosa, California, where they recorded what is now known as the Cremation of Care ceremony. What Jones caught on camera is like something out of a Stanley Kubrick film. Hooded figures made up of some of the world’s wealthiest, most powerful men including acting and former U.S. Presidents such as George W. Bush, George H.W. Bush, Vice President Dick Cheney and other participants gathered beneath a 40-foot-tall stone owl surrounded by water. A child (or effigy) dubbed “Dull Care” is delivered by a ferryman on a small boat and is placed on the altar before the owl, where it is burned as an offering for the purpose of magically alleviating the cares and concerns of those elitists making the sacrifice. Before Jones captured this astonishing ritual on film, American citizens were not even aware that such occultism is carried out under the cover of darkness by the world’s most powerful and respected leaders. Does this not cause reasonable people to question what other sorcery is occurring behind the veil? 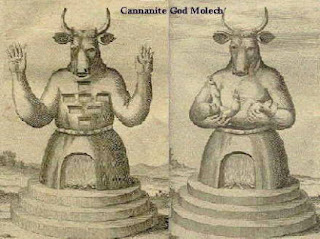 On his Web site, Jones says: “This is like something out of a Hollywood movie, where teenagers are out camping in the wilderness and come over a hill and witness some devil cult in black and red garb sacrificing some poor soul on a bloody altar.” Jones has written about the similarity between the Cremation of Care rite and the ancient Canaanite worship of the owl god Molech, where children were sacrificed for nearly identical reasons. Scholars have debated whether the child sacrifices made to Molech were burned alive, or were slain elsewhere and then drained of blood and offered as food to the deity. If the former, a comparison is made between Molech and Kronos, from whose brazen arms children were rolled alive into an oven of fire. Like the Bohemian ritual, the ancient Baals Molech and Kronos were usually called upon to relieve the ones making the sacrifice of their earthly cares, and people who sought material prosperity believed their lives could be improved by offering the child as a sacrifice to the deity.

Three hundred years before Christ, the Greek author Kleitarchos recorded the dastardly process of sacrificing infants in Cremations of Care to Kronos:

Out of reverence for Kronos, the Phoeniciens, and especially the Carthaginians, whenever they seek to obtain some great favor, vow one of their children, burning it as a sacrifice to the deity, if they are especially eager to gain success. There stands in their midst a bronze statue of Kronos, its hands extended over a bronze brazier, the flames of which engulf the child. When the flames fall on the body, the limbs contract and the open mouth seems almost to be laughing [such areas of child sacrifice were often called “the place of laughing”], until the contracted body slips quietly into the brazier. [5]

The sacrifice of children in this way was widespread in antiquity and was practiced by the children of Israel under the reign of King Ahab and Queen Jezebel. A recent archeological find illustrated how far-reaching such offerings were when it unearthed the remains of over 20,000 infants that had been sacrificed to a single Baal.

For some, a better candidate than Molech for the deity represented at the Bohemian Grove is the Mesopotamian storm demon Lilith, whose giant horned statues once formed the highest competition to Yahweh. In Hebrew folklore, Lilith is “the dark wind of the storm” who takes the form of an owl (still worshipped in modern Beltane / Mayday rituals) and, among other things, overshadows the sacrifice of children. She is a powerful seductress who, before Eve’s creation, was Adam’s wife and lover according to myth. The Cremation of Care ceremony conducted by U.S. presidents and other elitists for her (or Molech) at the Bohemian Grove is evidently especially seductive given that metaphysicians among them believe the biblical version of Abraham’s test on Moriah was sanitized by Moses in the Genesis account in an attempt to cover up the actual practice of human sacrifice among ancient Hebrews. Perhaps they see magic in a “corrected” version of the story—an heretical retelling—where Isaac is extinguished beneath the dark winged-one who rides in the Whirlwind and heals her power-hungry and seduced worshippers of their cares. As we shall see later in this study, the same occultists hid the image of the Owl in the Masonically designed U.S. dollar bill for a very important and related reason.

Whether Molech or Lilith is the deity represented in the annual Bohemian rituals, a greater legend involving the appropriate semiotic figures—Enoch, Moriah, Metatron, Shekinah, and the Temple Mount in Jerusalem—is captured in higher occult representation pointing directly to the Hidden Doctrine of the supranational power elite and their aspiration for a final earthly kingdom and New World Order ruled by “the one” who has reached apotheosis—the status of a god.
Posted by Tom Horn at 5:48 AM