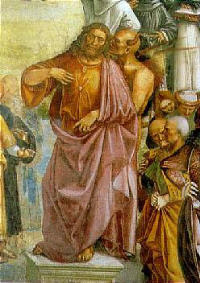 Editor's note: All notations will be cited when this series of articles have concluded. The information is based on research contained in Tom Horn's upcoming new book:
APOLLYON RISING 2012
The Lost Symbol Found And The Final Mystery Of The Great Seal Revealed
A Terrifying And Prophetic Cipher, Hidden From The World By The U.S. Government For Over 200 Years Is Here

WILL THE UNITED STATES GENERATE THE ANTICHRIST?

“America was designated as the New Atlantis that would lead the world to the Antichrist. The original national bird envisioned by our Masonic leadership in the late 1700’s was not the American Eagle, but the Phoenix Bird. This historic fact strongly suggests that, at the right moment in world history, with the world entering through the portals of the Kingdom of Antichrist, America might suddenly be immolated in fiery flames, burning to the ashes; out of these ashes, the New World Order would arise.”—David Bay, Cutting Edge Ministries

When US Representative Nancy Pelosi on January 4, 2007 assumed her roll as speaker of the House at the opening of the 110th Congress, she followed the pattern set by George W. Bush and his old man, infusing a loaded statement concerning the founding fathers, saying they were so confident in “the America they were advancing, they put on the seal, the great seal of the United States, ‘novus ordo seclorum’—a new order for the centuries.” Pelosi did not go into detail as to why she considered the phrase “Novus Ordo Seclorum” important dialectic during the momentous changeover of the control of congress, nor did she add why this expression exists beneath the unfinished pyramid and the All Seeing Eye (Eye of Horus/Osiris/Apollo) in the Great Seal of the United States in the first place. But her allusion to it was not coincidental, and the origins of the motto and the importance behind the increase in references to the cryptic passage by government insiders in recent years will become evident soon enough.

Undoubtedly upon reading the next few entries, low-level Masons who are intentionally kept in the dark by their superiors will write to complain about the stereotype of them as members in a secret plot toward global domination. Truth is, most Masons are moral people that know nothing about the goals of the Uber Echelon above them. Yet respected historians including some Masonic writers admit to what Gary Lachman in his book, Politics and the Occult called the most sensational historical association between Freemasons and American occult politics. Citing the works of professors like Robert Hieronimus, Lachman says, “the United States is—or at least was originally planned to be—the kind of utopia aimed at by the Rosicrucians.” Furthermore, Lachman writes, Washington, D.C. was laid out according to the precepts of sacred geometry “associated with Freemasonry.” [1]

That a Rosicrucian-Masonic brotherhood was involved in the American and French as well as European revolutions is indisputable today. As many as 44 (though probably a lower number) of the 56 signers of the Declaration of Independence were Freemasons. Numerous US Presidents were also part of The Craft, including Washington, Monroe, Jackson, Polk, Buchanan, A. Johnson, Garfield, McKinley, T. Roosevelt, Taft, Harding, F. Roosevelt, Truman, L.B. Johnson and Ford. Other elites in the Order included Benjamin Franklin, Paul Revere, and so on, and Thomas Jefferson was suspected but never proven to be a Brother in the Lodge.

Besides membership, the question of whether the Order of Freemasons engineered the US City named after America’s first president according to an occult grand-design is something that a growing body of historians and researchers are coming around to. David Ovason, who became a Mason after writing The Secret Architecture of our Nations’ Capital: the Masons and the Building of Washington, D.C., argues effectively that the city’s layout intentionally incorporated the esoteric belief-system of Freemasonry, especially as it involved astrologically alighning the capital with the constellation Virgo (Isis). In 1793 when George Washington sanctioned the laying of the capital building’s cornerstone, he did so wearing a Masonic apron emblazoned with the brotherhood’s symbols. For occult expert and 33rd Degree Freemason Manly P. Hall, this made perfect sense. “Was Francis Bacon’s vision of the ‘New Atlantis’ a prophetic dream of the great civilization, which was so soon to rise upon the soil of the New World?” he asked in The Secret Teachings of All Ages. “It cannot be doubted that the secret societies…conspired to establish [such] upon the American continent….’” Hall continued that historical incidents in the early development of the United States clearly bore “the influence of that secret body, which has so long guided the destinies of peoples and religions. By them nations are created as vehicles for the promulgation of ideals, and while nations are true to these ideals they survive; when they vary from them, they vanish like the Atlantis of old which had ceased to ‘know the gods.’” [2]

For those unfamiliar with this secret American-Masonic history or who do not have time to dedicate to the study, I cannot recommend highly enough an award-winning film series on the subject from Adullam Films now available on DVD (at places like SurvivorMall.com). The three films in “The Secret Mysteries Of America’s Beginnings” are a perfect primer for understanding the fascinating history behind the founding of America as the fulfillment of Bacon’s Rosicrucian New Atlantis and what this portends for humanity today. The three DVD series includes: Volume One—Secret Mysetries Of America’s Beginnings: The New Atlantis; Volume Two—Riddles In Stone: The Secret Architecture Of Washington, D.C.; and Volume Three—Eye Of The Phoenix: Secrets Of The Dollar Bill. Filmmaker Christian J. Pinto also kindly provided the Washington, D.C. street map included in this entry.

Involvement by Freemasons in the development of early America and the symbolic layout of Washington, D.C. as the Capital for the New Atlantis has been so well documented over the last two decades that even many Masons have ceased denying the affiliation. Daily Masonic tours through services devoted to this history are now offered of the city’s landmarks to illustrate the connection. For a fee, a guide will help you visit locations such as the George Washington Masonic National Memorial or the House of the Temple, the headquarters building of the Scottish Rite of Freemasonry. Designed in 1911 (note the connection again between Masons and the numerological value 9-11), the House of the Temple hosts the Freemason Hall of Fame, an enormous collection of Freemason memorabilia including various artworks important to Masons, a library of 250,000 books, and is the location for the Rite’s Supreme Council 33rd Degree meetings. Upon leaving, you can exit the House of the Temple, walk down the street and take pictures of the enormous Masonic obelisk (phallic Egyptian symbol of fertility) in the distance known as the Washington Monument. 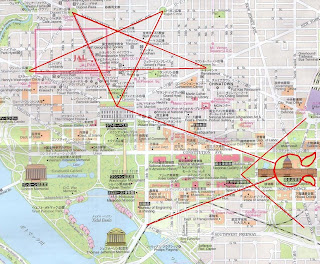 For obvious reasons, while modern Masons may openly admit these days to involvement by their Jacobite ancestors toward establishing the foundation for a utopian New World Order in Washington, D.C., most vigorously deny that the talisman-like layout of the streets, government buildings and Masonic monuments were meant for what researcher David Bay calls an “electric-type grid” that pulsates “with Luciferic power 24 hours a day, seven days a week.” Notwithstanding this denial, the government’s own records explain otherwise, clearly stating that the Capital’s Design was “shepherded” by those who wanted it to reflect dedication to “pagan gods.” For instance the article “The Most Approved Plan: The Competition for the Capitol’s Design” on the Library of Congress’s website tells how, after advertising a competition for the design of Government Center in D.C., “Washington, Jefferson, and the Commissioners of the District of Colombia” were disappointed by the entries, and a design based on “The Roman Pantheon—the circular domed rotunda dedicated to all pagan gods—was suggested by Jefferson, who later shepherded it through several transformations.” [3]

Freemason David Ovason adds that when the Cornerstone of the US Capital building was laid; it was done through Masonic ritual meant to procure approval of the pagan gods. As recorded in two bronze panels on the Senate doors of the Capital, George Washington is seen standing in front of a Mason who holds two versions of the Masonic square, while he himself uses a Masonic trowel on the cornerstone. It is the apron Washington so famously wore that day that bears specific Masonic symbolism, which Ovason explains as designed to please the “invisible agencies” 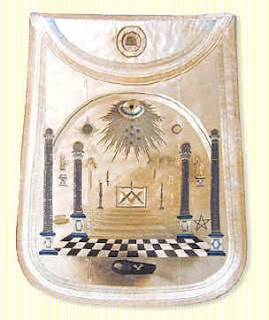 who watched over the event. “Undoubtedly, invisible agencies were present at the cornerstone ceremony,” he says, “but they were made visible in the apron’s symbolism. The radiant eye represented the invisible presence of the Great Architect—the high Spiritual Being who had been invited by prayer and ritual to oversee the ceremonial. The radiant eye was… the ‘sun-eye,’ or Spiritual Sun [Horus/Osiris/Apollo].”

Acknowledgment to such pagan gods through the use of images and symbols by Masons is interesting given their avowed consecration of the Bible, a book that clearly forbids this type activity as devotion to demons. In Acts 7:41-42 it explains that when men serve idols, they are worshipping the host or “army” of heaven. Psalms 96:5 adds, “For all the gods of the nations are idols” (‘elilim, LXX daimonia [demons]). Other references conclude that idols of stone or relevant imagery, such as permeates Washington, D.C., are ‘elilim (empty, nothing, vanity); but that behind these images exist the true dynamic of idolatry—demons. The Apostle Paul confirmed this in 1 Corinthians 10:20, saying, “the things which the Gentiles sacrifice, they sacrifice to devils, and not to God: and I would not that ye should have fellowship with devils.”
Posted by Tom Horn at 6:59 AM