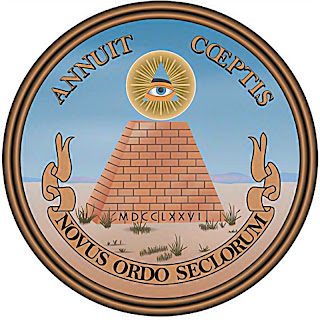 Editor's note: All notations will be cited when this series of articles have concluded. The information is based on research contained in Tom Horn's upcoming new book:
APOLLYON RISING 2012
The Lost Symbol Found And The Final Mystery Of The Great Seal Revealed
A Terrifying And Prophetic Cipher, Hidden From The World By The U.S. Government For Over 200 Years Is Here

“Not only were many of the founders of the United States Government Masons, but they received aid from a secret and august body existing in Europe, which helped them to establish this country for a peculiar and particular purpose known only to the initiated few. The Great Seal is the signature of this exalted body—unseen and for the most part unknown—and the unfinished pyramid upon its reverse side is a trestleboard setting forth symbolically the task to the accomplishment of which the United States Government was dedicated from the day of its inception.”—Manly P. Hall, 33rd Degree Freemason

Of all the “Masonic symbols” associated with the founding of America, Manly Hall viewed the design of the Great Seal of the United States as the highest signature of occult planning by Freemasons. This was not only due to the repetition of the number 13, the pentagram shapes, the uncapped pyramid or the Phoenix-Eagle, but Hall, like other experts in mystical literature and Western esoteric tradition understood the “mass of occult and Masonic symbols” on the Great Seal represented both the tangible ambitions of a new society and a metaphysical concept attributed to Hermes Trismegistus, which means that visible matter is mirrored by unseen reality, or, “as above, so below.”

Hall believed what this meant practically was that only students of archaic or esoteric symbolism would be able to decipher the true meaning hidden within the subterfuge of the seal’s design and that the symbolism was thus intended to convey two sets of meaning—the first for non-illuminates having to do with certain natural or historical issues perceived to be important to society; and the second deeper occult truisms meant for comprehension by members of the exalted Order. 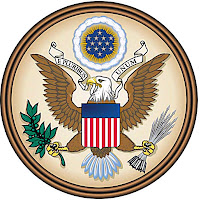 While examining the mountains of literature publicly available on the Great Seal including its history from the original resolution in 1776 to its final approval in 1782, it is important to note that general harmony exists among researchers concerning the superficial interpretation of the primary symbols.

For instance the obverse side of the Great Seal portrays a Bald Eagle clutching a bundle of arrows in its left talon, while in its right claw it grips an olive branch. The eagle is looking to the right, indicating that, while the United States prefers peace, it is always ready to go to war if necessary. The original 13 colonies are said to be represented in the 13 leaves of the olive branch, 13 olives on the branch, 13 bars and stripes in the shield, 13 letters in the phrase ‘E Pluribus Unum’ and the 13 stars above the eagles head (which, as researchers point out, forms a hexagram). On the reverse of the seal the number 13 continues in the stone layers of the pyramid and the 13 letters of ‘Annuit Coeptis.’ 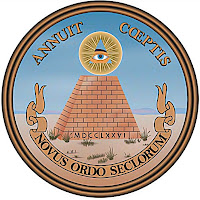 Yet according to esotericists like Hall, the extraordinary truth about the number 13 so affixed to the Great Seal was actually more than representation of the original colonies. It was a marker for those who understood it as a Masonic ‘power number,’ sacred to the Moon among other things and representative of the head of Isis, while the Eagle, Hall wrote, was a shrewd masquerade for the mythical Phoenix so important to Masonic mysticism. Hall partly came to this conclusion based on the early seal prototype of William Barton showing a Phoenix in its nest of flames.

“Most of the designs originally submitted had the Phoenix bird on its nest of flames as the central motif,” Hall said. “Its selection would of course have been appropriate…. [because] the Phoenix is one sign of the secret orders of the ancient world and of the initiate of those orders, for it was common to refer to one who had been accepted into the temples as a man twice-born, or re-born. Wisdom confers a new life, and those who become wise are born again.”

Hall went on in The Secret Destiny of America:

The Phoenix symbol is important in another way, as an emblem among nearly all civilized nations of royalty, power, superiority, and immortality. The Phoenix of China is identical in meaning with the Phoenix of Egypt; and the Phoenix of the Greeks is the same as the Thunder Bird of the American Indians…

It is immediately evident that the bird on the original seal is not an eagle… but the Phoenix…. The beak is of a different shape, the neck is much longer, and the small tuft of hair at the back of the head leaves no doubt as to the artist’s intention. [1]

Hall then acknowledged that if the design “on the obverse side of the seal is stamped with the signature” of the Masons, the design on the reverse was even more related to the Order’s “mysteries,”casting the United States within the society’s secret scheme to fulfill the Baconian dream of a New Atlantis by establishing America as the capital of the New World Order.

Here is represented the great pyramid of Gizah, composed of 13 rows of masonry, showing 72 stones. The pyramid is without a cap stone, and above its upper platform floats a triangle containing the All-Seeing Eye surrounded by rays of light…

The Pyramid of Gizah was believed by the ancient Egyptians to be the shrine tomb of the god Hermes, or Thot, the personification of Universal Wisdom.

No trace has ever been found of the cap of the great pyramid. A flat platform about thirty feet square gives no indication that this part of the structure was ever otherwise finished; and this is appropriate, as the Pyramid represents human society itself, imperfect and incomplete. The structure’s ascending converging angles and faces represent the common aspiration of humankind; above floats the symbol of the esoteric orders, the radiant triangle with its all-seeing eye…

There is a legend that in the lost Atlantis stood a great university in which originated most of the arts and sciences of the present race. The University was in the form of an immense pyramid with many galleries and corridors, and on the top was an observatory for the study of the stars. This temple to the sciences in the old Atlantis is shadowed forth in the seal of the new Atlantis. Was it the society of the unknown philosophers who scaled the new nation with the eternal emblems, that all the nations might know the purpose for which the new country had been founded?

…The combination of the Phoenix, the pyramid, and the all-seeing eye is more than chance or coincidence. There is nothing about the early struggles of the colonists to suggest such a selection to farmers, shopkeepers, and country gentlemen. There is only one possible origin for these symbols, and that is the secret societies which came to this country 150 years before the Revolutionary War. Most of the patriots who achieved American independence belonged to these societies, and derived their inspiration, courage, and high purpose from the ancient teaching. There can be no question that the great seal was directly inspired by these orders of the human Quest, and that it set forth the purpose for this nation as that purpose was seen and known to the Founding Fathers.

The monogram of the new Atlantis reveals this continent as set apart for the accomplishment of the great work—here is to arise the pyramid of human aspiration, the school of the secret sciences. [2]

Besides Manly Hall, late scholars that recognized the occult symbolism of the Great Seal as pointing to this ‘secret destiny of America’ included Rhodes Scholar James H. Billington and Harvard Professor Charles Eliot Norton, who described the Great Seal as hardly other than an “emblem of a Masonic Fraternity.” In 1846, 33rd Degree Freemason and noted author James D. Carter inadvertently confirmed this as well when he admitted the Masonic symbolism is clearly known whenever “an informed Mason examines the Great Seal.”

But for all the volumes that were written in the early years about the arcane meaning behind the obvious symbols on the Great Seal of the United States, it was not until the 1930s that, perhaps by providence, the significance of the Great Seal started finding its defining moment.

It happened when occult minded 32nd Degree Mason, Henry Wallace, the Secretary of Agriculture for the United States in 1934 became intrigued with the meaning behind the Great Seal. Wallace had been a disciple of Agni Yoga Society founder and theosophist, Nicholas Roerich, whose devotion to mysticism was increasingly focused on apocalyptic themes surrounding the coming of a new earthly order. This came to light publicly when Wallace ran as Vice President in the 1940 presidential election and was threatened with embarrassment by the Republicans, who had come into possession of a series of letters written by Wallace in the 1930s. The letters were addressed to Roerich as “Dear Guru” and described the anticipation Wallace felt for “the breaking of the New Day,” a time when a mythical kingdom would arrive on earth accompanied by a special breed of people. The Democrats barely kept the letters from the public by making threats of their own, and Wallace went on to become 33rd Vice President of the United States under the 32nd President, Franklin D. Roosevelt, himself a 32nd Degree Mason with an equal thirst for mysticism.