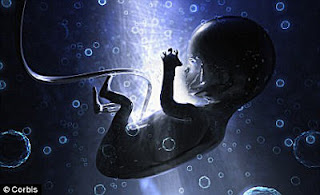 Editor's note: All notations will be cited in the final report. The information is based on research contained in Tom and Nita Horn's upcoming new book:
Forbidden Gates
How Genetics, Robotics, Artificial Intelligence, Synthetic Biology, Nanotechnology, & Human Enhancement Herald the Dawn of Techno-Dimensional Spiritual Warfare

Where biotechnology is ultimately headed includes not only redefining what it means to be human, but redefining subsequent human rights as well. For instance, Dr. James Hughes wants transgenic chimps and great apes uplifted genetically so that they achieve “personhood.” The underlying goal behind this theory would be to establish that basic cognitive aptitude should equal “personhood” and that this “cognitive standard” and not “human-ness” should be the key to constitutional protections and privileges. Among other things, this would lead to nonhuman “persons” and “nonperson” humans, unhinging the existing argument behind intrinsic sanctity of human life and paving the way for such things as harvesting organs from people like Terry Schiavo whenever the loss of cognitive ability equals the dispossession of “personhood.” These would be the first victims of transhumanism, according to Prof. Francis Fukuyama, concerning who does or does not qualify as fully human and is thus represented by the founding concept that “all men are created equal.” Most would argue that any human fits this bill, but women and blacks were not included in these rights in 1776 when Thomas Jefferson wrote the Declaration of Independence. So who is to say what protections can be automatically assumed in an age when human biology is altered and when personhood theory challenges what bioethicists like Wesley J. Smith champion as “human exceptionalism”: the idea that human beings carry special moral status in nature and special rights, such as the right to life, plus unique responsibilities, such as stewardship of the environment. Some, but not all, believers in human exceptionalism arrive at this concept from a biblical worldview based on Genesis 1:26, which says, “And God said, ‘Let us make man in our image, after our likeness: and let them have dominion over the fish of the sea, and over the fowl of the air, and over the cattle, and over all the earth, and over every creeping thing that creepeth upon the earth.’”

As discussed in the previous entry, technology to merge human brains with machines is progressing at a fantastic rate. Nanotechnology—the science of engineering materials or devices on an atomic and molecular scale between 1 to 100 nanometers (a nanometer is one billionth of a meter) in size—is poised to take the development between brain-machine interfaces and cybernetic devices to a whole new adaptive level for human modification. This will happen because, as Dr. C. Christopher Hook points out:

Engineering or manipulating matter and life at nanometer scale [foresees] that the structures of our bodies and our current tools could be significantly altered. In recent years, many governments around the world, including the United States with its National Nanotechnology Initiative, and scores of academic centers and corporations have committed increasing support for developing nanotechnology programs. The military, which has a significant interest in nanotechnology, has created the Center for Soldier Nanotechnologies (csn) [which is] interested in the use of such technology to help create the seamless interface of electronic devices with the human nervous system, engineering the cyborg soldier.[i]

In the early part of the twentieth century, the study and practice of selective human breeding known as eugenics sought to counter dysgenic aspects within the human gene pool and to improve overall human “genetic qualities.” Researchers in the United States, Britain, Canada, and Germany (where, under Adolf Hitler, eugenics operated under the banner of “racial hygiene” and allowed Josef Mengele, Otmar von Verschuer, and others to perform horrific experiments on live human beings in concentration camps to test their genetic theories) were interested in weeding out “inferior” human bloodlines and used studies to insinuate heritability between certain families and illnesses such as schizophrenia, blindness, deafness, dwarfism, bipolar disorder, and depression. Their published reports fueled the eugenics movement to develop state laws in the 1800s and 1900s that forcefully sterilized persons considered unhealthy or mentally ill in order to prevent them from “passing on” their genetic inferiority to future generations. Such laws were not abolished in the U.S. until the mid-twentieth century, leading to more than sixty thousand sterilized Americans in the meantime. Between 1934 and 1937, the Nazis likewise sterilized an estimated four hundred thousand people they deemed of inferior genetic stock while also setting forth to selectively exterminate the Jews as “genetic aberrations” under the same program. Transhumanist goals of using biotechnology, nanotechnology, mind-interfacing, and related sciences to create a superior man and thus classifications of persons—the enhanced and the unenhanced—opens the door for a new form of eugenics and social Darwinism.

Germ-line genetic engineering has the potential to actually achieve the goals of the early eugenics movement (which sought to create superior humans via improving genetics through selective breeding) through genetically modifying human genes in very early embryos, sperm, and eggs. As a result, germ-line engineering is considered by some conservative bioethicists to be the most dangerous of human-enhancement technology, as it has the power to truly reassemble the very nature of humanity into posthuman, altering an embryo’s every cell and leading to inheritable modifications extending to all succeeding generations. Debate over germ-line engineering is therefore most critical, because as changes to “downline” genetic offspring are set in motion, the nature and physical makeup of mankind will be altered with no hope of reversal, thereby permanently reshaping humanity’s future. A respected proponent of germ-line technology is Dr. Gregory Stock, who, like cyborgist Kevin Warwick, departs from Kurzweil’s version of Humans 2.0 first arriving as a result of computer Singularity. Stock believes man can choose to transcend existing biological limitations in the nearer future (at or before computers reach strong artificial intelligence) through germ-line engineering. If we can make better humans by adding new genes to their dna, he asks, why shouldn’t we? “We have spent billions to unravel our biology, not out of idle curiosity, but in the hope of bettering our lives. We are not about to turn away from this,” he says, before admitting elsewhere that this could lead to “clusters of genetically enhanced superhumans who will dominate if not enslave us.”[ii] The titles to Stock’s books speak for themselves concerning what germ-line engineering would do to the human race. The name of one is Redesigning Humans: Our Inevitable Genetic Future and another is Metaman: The Merging of Humans and Machines into a Global Superorganism.

While positive advances either already have been or will come from some of the science and technology fields we have discussed, learned men like Prof. Francis Fukuyama, in his book, Our Posthuman Future: Consequences of the Biotechnology Revolution, warn that unintended consequences resulting from what mankind has now set in motion represents the most dangerous time in earth’s history, a period when exotic technology in the hands of transhumanist ambitions could forever alter what it means to be human. To those who would engineer a transhuman future, Fukuyama warns of a dehumanized “hell scenario” in which we “no longer struggle, aspire, love, feel pain, make difficult moral choices, have families, or do any of the things that we traditionally associate with being human.” In this ultimate identity crisis, we would “no longer have the characteristics that give us human dignity” because, for one thing, “people dehumanized à la Brave New World...don’t know that they are dehumanized, and, what is worse, would not care if they knew. They are, indeed, happy slaves with a slavish happiness.”[iii] The “hell scenario” envisioned by Fukuyama is but a beginning to what other intelligent thinkers believe could go wrong.

On the other end of the spectrum and diametrically opposed to Fukuyama’s conclusions is an equally energetic crowd that subscribes to a form of technological utopianism called the “heaven scenario.” Among this group, a “who’s who” of transhumansist evangelists such as Ray Kurzweil, James Hughes, Nick Bostrom, and Gregory Stock see the dawn of a new Age of Enlightenment arriving as a result of the accelerating pace of Grin technologies. As with the eighteenth-century Enlightenment in which intellectual and scientific reason elevated the authority of scientists over priests, techno-utopians believe they will triumph over prophets of doom by “stealing fire from the gods, breathing life into inert matter, and gaining immortality. Our efforts to become something more than human have a long and distinguished genealogy. Tracing the history of those efforts illuminates human nature. In every civilization, in every era, we have given the gods no peace.”[iv] Such men are joined in their quest for godlike constitutions by a growing list of official U.S. departments that dole out hundreds of millions of dollars each year for science and technology research. The National Science Foundation and the United States Department of Commerce anticipated this development over a decade ago, publishing the government report Converging Technologies for Improving Human Performance—complete with diagrams and bullet points—to lay out the blueprint for the radical evolution of man and machine. Their vision imagined that, starting around the year 2012, the “heaven scenario” would begin to be manifested and quickly result in (among other things):


I'll resume in the next entry beyond how human augmentation and biological reinvention would spread into the wider culture following 2012.

Sign up to be notified when the book on which this series is based is released and receive OVER $60.00 IN FREE GIFTS! Sign up here!

WATCH THE TRAILER! WARNING: NOT FOR THE WEAK!