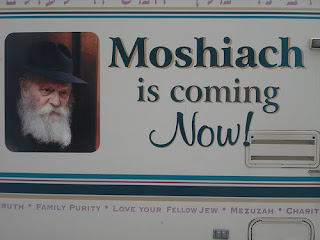 This last Wednesday on Coast to Coast AM, people were particularly taken with comments I made about the 700-year old Zohar predicting the arrival of the Jewish Messiah in the year 2012.

I must give credit where credit is due.

I was in my office earlier this year when Dr. J.R. Church of Prophecy in the News called me about my latest research, asking if I was aware that ancient orthodox Jewish prophets in the Zohar had predicted the arrival of their Messiah in the year 2012. I was not, and given that the Zohar is widely regarded the most important work of Jewish Kabbalah, J.R. certainly had my attention. Our conversation lasted about an hour with exciting details I am hoping to write soon, but involved several startling observations including those by a rabbi named Simeon:

"When the sixtieth year shall have passed over the threshold of the sixth millennium, the God of heaven will visit the daughter of Jacob with a preliminary remembrance. Another six and a half years will then elapse, and there will be a full remembrance of her …

"This "sixtieth year" of the Jewish calendar, says J.R., passed over the "threshold of the sixth millennium" in the year 2000.

J.R. followed up in an email:

It was the Jewish year 5760. According to the 700 year-old prophecy, God will visit the "daughter" or remnant of Jacob with a "preliminary remembrance." Just what this preliminary remembrance should be is not clear. But what is clear, is that it is only preliminary. It is not the final arrival of the Messiah to establish the kingdom.

"Then all the nations shall combine together against the daughter of Jacob in order to drive her from the world. It is of that time that it is written: "And it is a time of trouble unto Jacob, but out of it he shall be saved" (Jeremiah 30:7)."

This ancient rabbinical dissertation claims that Rome will be destroyed in the Jewish calendar year 5773, which, in our calendar begins with the new moon of September 2012 and concludes a year later:

"In the year seventy-three [2012 / 2013] the kings of the world will assemble in the great city of Rome, and the Holy One will shower on them fire and hail and meteoric stones until they are all destroyed, with the exception of those who will not yet have arrived there."

Besides the obvious revelations of the Zohar prophecies, another thing that immediately stood out to me was how among other scholars of the implications of the year 2012, a few have pointed to a prophecy by Malachy O’Morgair, or "St. Malachy" as he is known to Catholics, having to do with "the last pope." This prophecy, taken from St. Malachy’s "Prophecy of the Popes," is among a list of verses predicting each of the Roman Catholic popes from Pope Celestine II to the final pope, "Peter the Roman," whose reign would end in the destruction of Rome. According to Malachy’s prophecy, the next pope (following Benedict the 16th) is to be the final pontiff, Petrus Romanus, or "Peter the Roman." He will assume authority during a time of great tribulation, and then "the city of seven hills will be destroyed, and the terrible and fearsome Judge will judge his people."