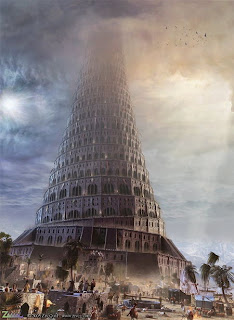 EDITOR'S NOTE: All notations will be cited in the final report. The information is based on research contained in Tom and Nita Horn's upcoming new book:

We believe an example of such Nephilim “resurrection” as discussed in the last entry may exist in the Bible, which evolved as a result of human genetic alteration. The story is doubly important to our upcoming book Forbidden Gates as well as the current book Apollyon Rising 2012 because it centers around Nimrod, the original character who later was mythologized as the god Apollo prophesied by the apostle Paul in the New Testament (and by the occult elite on the Great Seal of the United States) as the ancient spirit that will return to earth to rule the novus ordo seclorum. The story of Nimrod in the book of Genesis may illustrate how this could happen through genetic engineering or a retrovirus of demonic design that integrates with a host’s genome and rewrites the living specimen’s dna, thus making it a “fit extension” or host for infection by the entity. Note what Genesis 10:8 says about Nimrod:


And Cush begat Nimrod: he began to be a mighty one in the earth.

Three sections in this unprecedented verse indicate something very peculiar happened to Nimrod. First, note where the text says, “he began to be.” In Hebrew, this is chalal, which means “to become profaned, defiled, polluted, or desecrated ritually, sexually or genetically.” Second, this verse tells us exactly what Nimrod began to be as he changed genetically—“a mighty one” (gibbowr, gibborim), one of the offspring of Nephilim. As Annette Yoshiko Reed says in the Cambridge University book, Fallen Angels and the History of Judaism and Christianity, “The Nephilim of Genesis 6:4 are always…grouped together with the gibborim as the progeny of the Watchers and human women.”[i] And the third part of this text says the change to Nimrod started while he was on “earth.” Therefore, in modern language, this text could accurately be translated to say: “And Nimrod began to change genetically, becoming a gibborim, the offspring of watchers on earth.”

To understand how as a mature, living specimen Nimrod could have “begun to be a gibborim,” it is helpful to imagine this in terms of biology as we know it. For instance, not long ago, I “began to be” a diabetic. Because of poor choices of food, diet, and exercise, my doctor tells me that I triggered a genetic inherent and that it began changing me genetically. Yet just because I had the heritable, disease-related genotype that can lead to diabetes, this did not mean necessarily that I would develop the medical condition. It is entirely possible to be a carrier of a genetic mutation that increases the risk of developing a particular disease without ever actually becoming afflicted with the disorder in the course of a lifetime. Due to my earlier lifestyle, or maybe even certain environmental conditions I was unaware of, the gene mutation involved in the action of insulin “turned on” and I “began to be” a diabetic.

We’ve often wondered if the record of Nimrod that says he “began to be” a “gibborim” indicated something similar about his genetics, dna, or bloodline that “turned on” as a result of his decisions, triggering a change in him from one type of being to another. It is also a possibility, we suppose, that Nimrod became afflicted with a retrovirus that integrated with his genome and, in essence, “rewrote” his genetic makeup, fashioning him into a transhuman or posthuman “fit extension” for an underworldly spirit. When we asked Sharon Gilbert, author of The Armageddon Strain whose formal education includes theology, molecular biology, and genetics, if she thought this was possible, she said:

Absolutely! Retroviruses essentially inject single-stranded rna strands into somatic (body) cells during “infection.” These ssrna strands access nucleotide pools in the host cell and form a double-stranded dna copy. This dsdna can then incorporate itself into the host chromosome using a viral enzyme called “integrase.” The new “fake gene” then orders the cell to make more mrna copies of the original virus rna. These then travel out of the cell and infect the next cell, and so on.

Perhaps this type of genetic rewriting is implied in Genesis 10:8, which says, “And Cush begat Nimrod: he began to be a mighty one [gibborim] in the earth.”

In addition to such scientific deduction, another reason we believe this story is suspicious is because of what Nimrod did immediately following Genesis chapter 10. As soon as he “began to be a mighty one,” he set out to build a tower whose top would “reach unto heaven” (Genesis 11:4). This was the infamous Tower of Babel, and Nimrod was designing it so that the top of it would extend into Shamayim (“heaven”), the abode of God. The Jewish Encyclopedia confirms several historical records that Nimrod, whom it establishes was also identified by various ancient cultures alternatively as the god Apollo, built the Tower of Babel in an attempt to defiantly ascend into the presence of God. Jehovah Himself came down and said of the Tower’s design: “Nothing will be restrained from them, which they have imagined to do” (Genesis 11:6). In other words, according to the Lord, Nimrod would have accomplished what he “imagined” to do—to build a tower whose top would reach into the abode of God.

That this section of Scripture could be viewed as a secondary support for the concept of Nimrod having become “revived Watcher offspring” is supported by Nimrod seeming to be abruptly aware of where and how tall to build a tower so that the top of it would penetrate the dwelling place of God. Were his eyes suddenly opened to realities that are outside man’s normal mode of perception? Did he become Prof. Nick Bostrom and the Arizona State University’s Sophia Project dream come true, capable of seeing into the spirit world as a result of transhuman or posthuman alteration? If Nimrod was genetically modified according to the original Watcher formula, he would have inherited animal characteristics (Bostrom’s method) within his new material makeup, and according to the biblical story of Balaam’s donkey, animals can, like angels, perceive “domains” that humans cannot. This includes obvious things, such as wavelengths of the electromagnetic spectrum, but evidently something even more substantial, like the spirit realm. Additionally, as Nimrod/Apollo became gibborim, he would have taken on Watchers’ propensities, which, as angels, could see into the supernatural realm including where heaven is located and possibly where to enter it. Even the name “Babylon” implies this, meaning the “gate of God” or “gateway to God.” Sacred locations where beings that can see into the supernatural realm could literally walk up onto a high place and enter heaven is not as farfetched as it sounds. Numerous examples from the Bible may substantiate the idea that heaven could be attained on high towers or mountainous locations. Consider Moses meeting with God on Sinai, Jesus returning atop the Mount of Olives, the two hundred Watchers that “descended in the days of Jared on the summit of Mount Hermon” (from the Apocryphal Book of Enoch 6:6) and other examples, including Jacob’s ladder. This could also explain why, in the deep recesses of our psyche, people tend to believe that they can draw closer to God when going up onto mountains.

The big question is this: Could a modern form of a genetically altered Nimrod/Apollo returning as the Antichrist with an army of revived Nephilim reopen these gateways (Isaiah 13:2–3) and fulfill the sign of “the days of Noah,” which Jesus said would mark the time just prior to His return? A growing body of theologians believes so, and we make no argument against it, but we are happy in upcoming entries to share “other” signs of the days of Noah, ones we believe could be manifested in these troubling times as well—signs wherein true believers become the only power on earth against which the ancient spirit of modern transhumansim cannot prevail.

Sign up to be notified when the book on which this series is based is released and receive OVER $80.00 IN FREE GIFTS! Sign up here!

WATCH THE TRAILER! WARNING: NOT FOR THE WEAK!