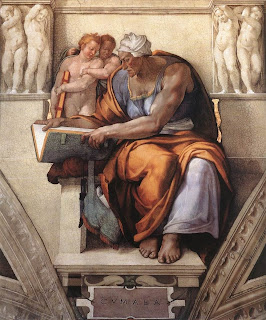 Editor's note: All notations will be cited in the final report. The information is based on research contained in Tom and Nita Horn's upcoming new book:
Forbidden Gates
How Genetics, Robotics, Artificial Intelligence, Synthetic Biology, Nanotechnology, & Human Enhancement Herald the Dawn of Techno-Dimensional Spiritual Warfare

The moment that the Lydians (the messengers of Croesus) entered the sanctuary, and before they put their questions, the Pythoness thus answered them in hexameter verse: "Lo! on my sense there striketh the smell of a shell-covered tortoise, Boiling now on a fire, with the flesh of a lamb, in a cauldron. Brass is the vessel below, and brass the cover above it."
These words the Lydians wrote down at the mouth of the Pythoness as she prophesied, and then set off on their return to Sardis.
[When] Croesus undid the rolls…[he] instantly made an act of adoration…declaring that the Delphic was the only really oracular shrine.… For on the departure of his messengers he had set himself to think what was most impossible for anyone to conceive of his doing, and then, waiting till the day agreed on came, he acted as he had determined. He took a tortoise and a lamb, and cutting them in pieces with his own hands, boiled them together in a brazen cauldron, covered over with a lid which was also of brass. (Herodotus, Book 1:47) [2]

Another interesting example of spiritual insight by an Apollonian sibyl is found in the New Testament book of Acts. Here the demonic resource that energized the sibyls is revealed:

And it came to pass, as we went to prayer, a certain damsel possessed with a spirit of divination [of python, a seeress of Delphi] met us, which brought her masters much gain by soothsaying: The same followed Paul and us, and cried, saying, "These men are the servants of the most high God, which shew unto us the way of salvation." And this did she many days. But Paul, being grieved, turned and said to the spirit, "I command thee in the name of Jesus Christ to come out of her." And he came out the same hour. And when her masters saw that the hope of their gains was gone, they caught Paul and Silas.… And brought them to the magistrates, saying, "These men, being Jews, do exceedingly trouble our city." (Acts 16:16–20)

The story in Acts is interesting because it illustrates the level of culture and economy that had been built around the oracle worship of Apollo. It cost the average Athenian more than two days’ wages for an oracular inquiry, and the average cost to lawmakers or military officials seeking important state information was charged at ten times that rate.
But now, as the old saying goes, "everything old is new again," and across the world a staggering amount of revenue is flowing once more into oracle divining for the purpose of breaching supernatural gateways. Through pharmakeia, grimoires, talismans, magic diagrams, sibylline channeling, and scores of other methods, adherents of new spirituality are actively seeking contact with the powers on the other side just as they did in days of old.
One of the most curious forms of oracular activity in use by modern soothsayers is the psychomanteum—a simple, yet eerie, idea. A chair placed in front of a large mirror in a dark room serves as the oracle. Once positioned on the chair, the occupant stares into the mirror and waits for contact with ghosts or other entities. In ancient times, a psychomanteum-like mirror system for communicating with "spirits" was employed by primitive Greeks in gloomy underground caverns called "halls of visions." Standing in front of a shining metal surface or cauldron, ancients saw and spoke with apparitions. The Sumerians, Egyptians, and Romans employed similar oracles of polished crystal, brass mirrors, and pools of water, and some argue that the apostle Paul was referring to mirror oracles when he said, "For now we see through a glass, darkly; but then face to face: now I know in part; but then shall I know even as also I am known" (1 Corinthians 13:12).
Revived as an oracle during the 1990s in the book Reunions, more than 50 percent of the three hundred users of the psychomanteum in a study by Raymond Moody claimed to have been contacted by a deceased "relative" or "friend" on the first try. People interviewed by Mr. Moody included physicians, teachers, housewives, business owners, and law enforcement officials. One witness, an accountant who grieved over his departed mother a year after her death, testified of his experience with the psychomanteum:

There is no doubt that the person I saw in the mirror was my mother! I don’t know where she came from but I am convinced that what I saw was the real person. She was looking out at me from the mirror.... I could tell she was in her late seventies, about the same age as... when she died. However, she looked happier and healthier than she had at the end of her life. Her lips didn’t move, but she spoke to me and I clearly heard what she had to say. She said, "I’m fine," and smiled.... I stayed as relaxed as I could and just looked at her.... Then I decided to talk to her. I said, "It’s good to see you again." "It’s good to see you too," she replied. That was it. She simply disappeared. [3]

Although the Bible warns against opening such gateways to "familiar spirits" or consulting mediums and sibyls, the revival of ancient oracles and the experiences being drawn from them are especially seductive curiosities for followers of modern religion. A quick glance through the most current popular television programs illustrates a great deal about the public’s interest in this field: Ghost Hunters, Ghost Hunters International, Ghost Hunters Academy, Ghost Whisperer, Paranormal State, Psychic Kids: Paranormal Children, Animal Planet’s The Haunted, and more. Sociologists understand public demand for such viewing is evidence of pop culture’s preferred spirituality, an informal consensus toward a post-New Testament theological condition. As such, it is reasonable to see how modern culture may rapidly be approaching the culmination of Apollo’s novus ordo seclorum—the prophecy on the Great Seal of the United States that forecasts the granddaddy of all spirit-gate transmigrations, an advent prophesied in 2 Thessalonians 2:3 and Revelation 17:8 in which the destroyer demon Apollo (Apoleia: Apollyon) rises through underworld gates in the last days to confront the world that sought it.
Sign up to be notified when the book is released and receive OVER $60.00 IN FREE GIFTS! Sign up here!
Posted by Tom Horn at 12:06 PM